Spain | Plan a vacation to Spain 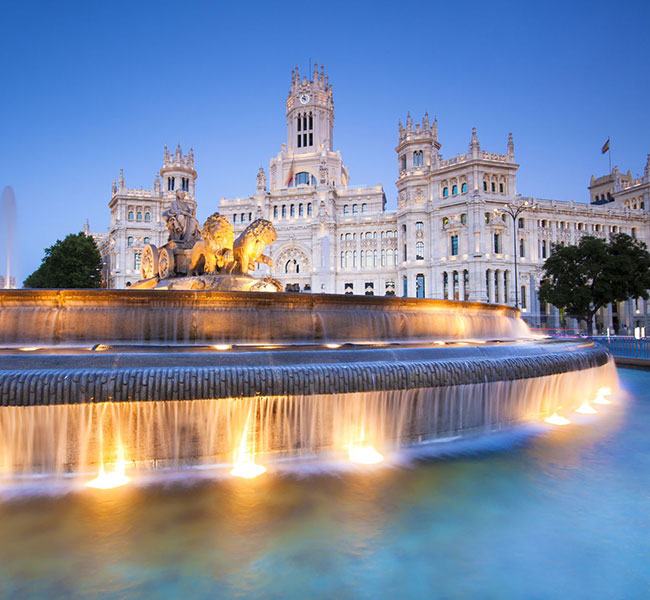 Madrid is strategically located at the geographical centre of the Iberian peninsula, 646 meters above sea level. Its old town is exemplary among major European cities, and blends harmoniously with the most modern and convenient of urban infrastructure. Madrid offers a broad range of accommodation and services along with the most advanced audiovisual and communication technology.

All this, combined with the momentum of a society that is dynamic and open, and at the same time warm and welcoming, has turned this metropolis into one of the western world's great capitals.

The Madrid area has been settled since the Lower Paleolithic age, but it was not until 1561 that King Philip II made it the capital of his mighty empire. The historic old town, also known as "Madrid de los Austrias" (referring to the Hapsburg empire) is a living example of the city's 16th and 17th century heyday, as is its impressive Plaza Mayor (square), which was opened in 1620 and remains one of Spain's most popular and typical spots.

Near to the Plaza Mayor is the so-called "aristocratic centre" of Madrid, home to the stunning Royal Palace, a 17th century monument that combines Baroque and Classical styles. Next to the palace you can find the Plaza de Oriente (square), the Opera House and the modern Almudena Cathedral, consecrated in 1993 by Pope John Paul II. This ensemble of monuments is completed by the Puerta del Sol, a square flanked by select shops, and the "Paseo del Arte", so called for its unique museums, palaces and gardens, not forgetting the unmistakable Bank of Spain building, the Palacio de las Telecomunicaciones (currently home to the Spanish Post Office) and the Cibeles and Neptuno fountains.

Art and culture are central to Madrid life. The city has 73 museums that cover all fields of human knowledge. Of these, the most important are the Prado Museum, one of the world's greatest art galleries, the Thyssen-Bornemisza Museum with more than 800 paintings, sculptures and tapestries that go from the earliest Dutch masters to the most avant-garde trends, and the Reina Sofia National Art Centre, which is dedicated to Spanish contemporary art, with works by Picasso, Joan Miro, Salvador Dali and Juan Gris among others.

123 Visitors and residents alike can enjoy the sun, go for walks, go rowing or feed the squirrels in Madrid's large, impeccable parks and gardens. The Retiro Park, once playground of Spanish Monarchs, the Casa de Campo and the Juan Carlos I Park among others make Madrid one of Europe's greenest capitals. Madrid is also one of Europe's most attractive business centres. Its international airport receives more than one thousand flights weekly from all over the world and it has two main conference centres, as well as the modern Campo de las Naciones exhibition centre and a capacity to hold more than 80,000 people in other varied conference and meeting facilities.

If there is one thing, however, that characterizes Madrid, it is the deep, contagious passion for life reflected in its friendly, welcoming people. Madrid boasts concerts, exhibitions, ballets, select theatre productions, and the latest cinematographic releases. You can sample a wide variety of the finest Spanish and international cuisine or be enchanted by its bars and taverns. These are just some of Madrid's leisure alternatives, alongside tempting shopping in the most traditional establishments and world-famous outlets stocking the finest international brands.

Madrid's happening nightlife is another major attraction. Its pubs, bars, discos and flamenco clubs have a tremendous atmosphere, while by day there are traditional verbenas (open-air dances), popular festivals or the San Isidro bullfighting festival - rated as the world's most important. (Turismo Spain)