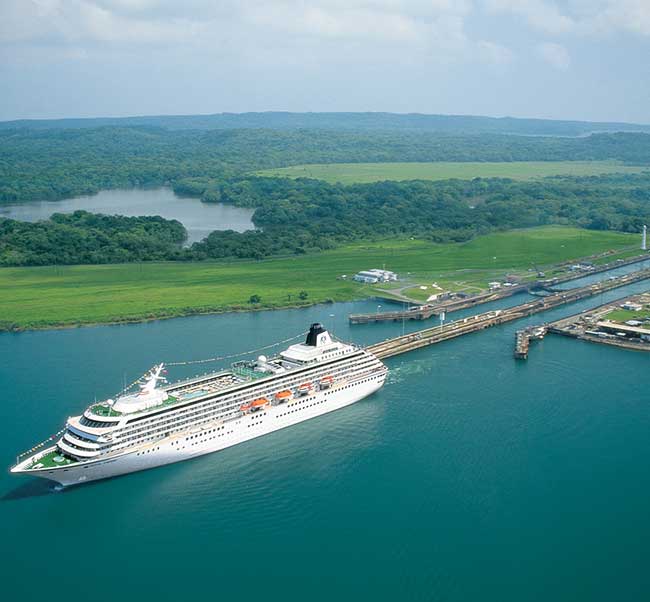 The Panama Canal is a 48 mile ship canal in Panama that joins the Atlantic Ocean and the Pacific Ocean and is a key conduit for international maritime trade. Built from 1904 to 1914, annual traffic has risen from about 1,000 ships in the canal's early days to 14,702 vessels in 2008.

One of the largest and most difficult engineering projects ever undertaken, the canal had an enormous impact on shipping between the two oceans, replacing the long and treacherous route via the Drake Passage and Cape Horn at the southernmost tip of South America.

A ship sailing from New York to San Francisco via the canal now travels 5,900 miles, well under half the 14,000 mile route around Cape Horn.

Stand face-to-face with the grandeur of the Panama Canal aboard your cruise ship. Whether you cross from Atlantic to Pacific or vice-versa, you'll encounter experiences that lifelong explorers like Magellan could only dream of.

When your ship enters the canal, it will rise 85 feet in one of the legendary Gatún Locks. As you cross the Continental Divide - a journey that took mariners of long ago years to complete - a new world of wonder and amazement awaits you on the other side.

A Panama Canal cruise will undoubtedly be an enlightening and rewarding journey. Make your Panama Canal cruise experience even richer with a shore excursion. Discover the rare beauty of a rainforest canopy aboard an aerial tram or ride the tracks of the first trans-continental railroad. Possibilities abound when you journey ashore.