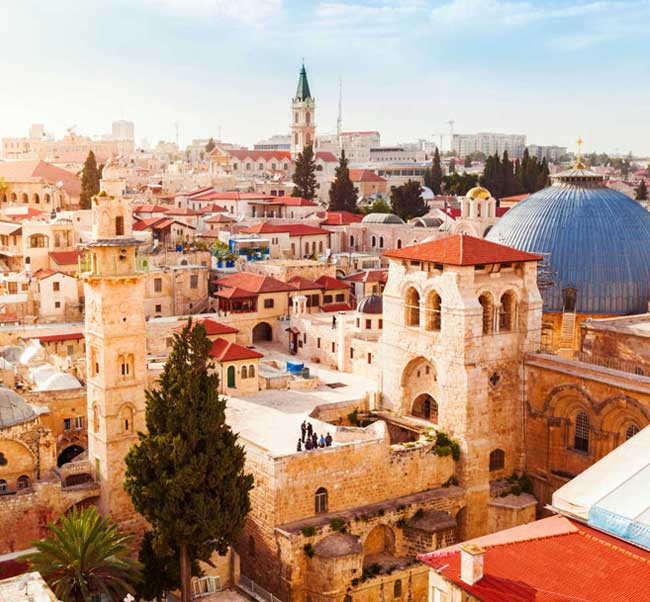 Arrive in Tel Aviv and enjoy a welcome dinner at your hotel as well as an excursion to the Valley of Elah, the Monastery of the Trappist Monks in Latrun, and the ancient port of Jaffa. Start your travel through the Holy Land and enjoy visits to all its famous sites, like Caesarea, Haifa, Acre, Cana, Bet Sheâ€™an, and the Dead Sea. Highlights are a stay at a kibbutz, where you will hear about life in a kibbutz during a lecture; a cruise on the Sea of Galilee; a visit to the Church of the Annunciation; and more.

Four nights in Jerusalem include visits to Yad Vashem, the Israel Museum, the Church of the Nativity in Bethlehem, a guided walking tour along Via Dolorosa, the Wailing Wall, King David's tomb, and much more. Also ride a cable car, visit the cliff-top fortress of Masada, and enjoy a farewell dinner. An unforgettable vacation!

The traveler to Israel walks through history: from windswept crusader castles to ports where seamen, pilgrims and famous travelers spent some time and then moved on; from desert landscapes that were home to traveling tribes, half forgotten armies and merchants in camel caravans, to sheikhsâ€™ tombs with whitened domes, silent monasteries and ancient synagogues decorated with colorful mosaics.

The State of Israel was created in the Land of Israel which was promised to the People of Israel according to Jewish tradition. It was where Jesus, the Christian Messiah, was born and the place where Mohammed, the Moslem Prophet, ascended to heaven. The meeting place of three continents and two seas, the country is a skein of cultures, customs and traditions, a country that was home to many people, cultures and changing religions. On the crossroads of ancient routes of commerce, the land also saw waves of conquering armies: the Canaanites, Hebrews, Babylonians, Persians, Greeks, Romans, Arabs, Crusaders Ottoman Turks and the British made this much-desired small country into a battlefield where they strove for eminence, built fortifications, castles and royal palaces. (Courtesy: Go Israel)