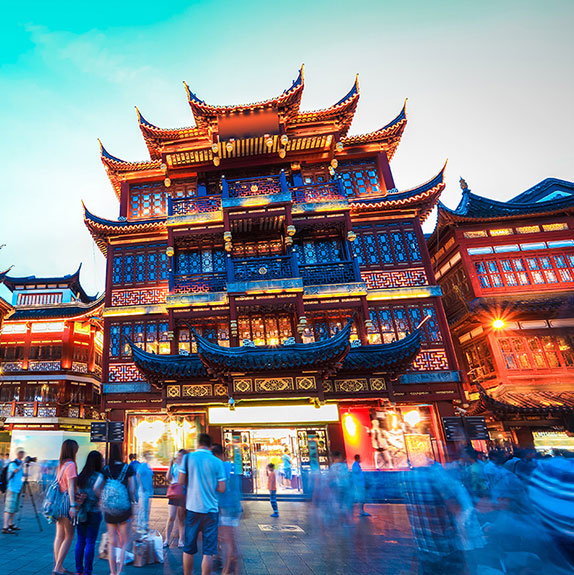 The People's Republic of China is the third largest country in the world in terms of area. It is situated in eastern Asia on the western shore of the Pacific Ocean, with an area of 9.6 million square kilometers. China's continental coastline extends for about 18,000 kilometers, and its vast sea surface is studded with more than 5,000 islands, of which Taiwan and Hainan are the largest. China has shared borders for centuries with Korea, the formerly Soviet Union, Afghanistan, Pakistan, India, Nepal, Sikkim, Bhutan, Burma, Laos and Vietnam.

China is forever linked to its ancient civilization, friendly people, and many of the worldâ€™s most revered treasures, such as The Great Wall, Terra-Cotta Warriors & Horses and the Yangtze River. Today, one can also find spectacular architecture and towering skylines in Shanghai and Beijing (site of the 2008 Summer Olympics), a wealth of luxury accommodations – and as always – exquisite cuisine.

Come and see why China is drawing millions of visitors from all over the world. And, why each and everyone of them returns home smiling :)

China's land drops off in the escarpments eastward to the ocean, letting in humid air currents and leading many rivers eastward. Among the rivers totalling 220,000 kilometres in length in China; the Yangtze and the Yellow are the two major ones.

China has a diversity of land formations including mountains, hills, highlands, plains and basins. The highlands and hill regions account for 65 percent of the country's land mass. The highest mountain peak is Qomolangma (Everest), 8,848 metres above sea level; the lowest point is the Turpan Basin, 154 metres below sea level.

A new generation of Chinese managed hotels is the cornerstone of a highly developed, traveler-friendly tourism infrastructure. China now has a complete range of hotel choices in all price categories, from luxurious five-star suites to deluxe mid-priced hotels and clean, comfortable rooms even in the budget category. Today, every major city in China can provide discriminating travelers with a wide selection of modern, world-class properties that meet, and often exceed, international standards.

Hotels such as the famous Peace Hotel (on the Bund) in Shanghai, the Palace Hotel in Beijing (close to the Forbidden City), and the White Swan in Guangzhou have gained international reputations for their exquisite decor, international gourmet dining, and first-class service. Familiar chains such as Sheraton, Holiday Inn, Hyatt, Hilton, and Ramada now operate deluxe hotels throughout China as well. Business travelers note that China has come a long way even since the early 1990's in terms of 16 service, management, and facilities. All 4 & 5-star hotels have complete business centers with computer and secretarial services available. (Courtesy CNTO)