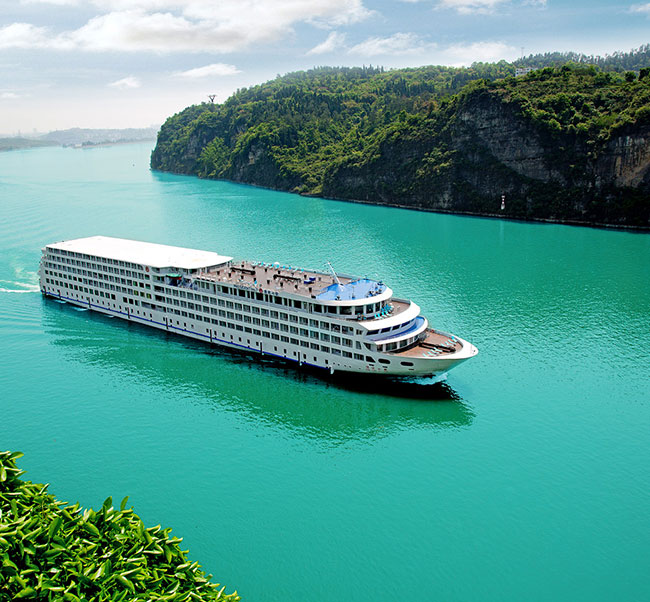 The Yangtze or Yangzi is the longest river in Asia, the third-longest in the world at 3,900 miles (6,300 km), with a basin size of ‎1,808,500 km2 (698,300 sq mi). It is the most visited, and cruised, river in China, and all of Asia, as well. Often the highlight of an extended visit to China, a Yangzi River cruise can last from 3-10 days, and can be taken in modern, luxurious river cruise ships with amenities available no where else in China.

The name Yangtze—derived from the name of the ancient fiefdom of Yang—has been applied to the river mainly by those in the West. Chang Jiang (“Long River”) is the name used in China, although it also is called Da Jiang (“Great River”) or, simply, Jiang (“[The] River”).

There are also many ocean cruises that visit numerous Chinese port cities, as well as Hong Kong.

The People's Republic of China is the third largest country in the world in terms of area. It is situated in eastern Asia on the western shore of the Pacific Ocean, with an area of 9.6 million square kilometers. China's continental coastline extends for about 18,000 kilometers, and its vast sea surface is studded with more than 5,000 islands, of which Taiwan and Hainan are the largest.

China is forever linked to its ancient civilization, friendly people, and many of the world's most revered treasures, such as The Great Wall, Terra-Cotta Warriors & Horses and the Yangtze River. Today, one can also find spectacular architecture and towering skylines in Shanghai and Beijing (site of the 2008 Summer Olympics), a wealth of luxury accommodations – and as always – exquisite cuisine.

Come and see why China is drawing millions of visitors from all over the world. And, why each and everyone of them returns home smiling :)

A new generation of Chinese managed hotels is the cornerstone of a highly developed, traveler-friendly tourism infrastructure. China now has a complete range of hotel choices in all price categories, from luxurious five-star suites to deluxe mid-priced hotels and clean, comfortable rooms even in the budget category. Today, every major city in China can provide discriminating travelers with a wide selection of modern, world-class properties that meet, and often exceed, international standards.

Hotels such as the famous Peace Hotel (on the Bund) in Shanghai, the Palace Hotel in Beijing (close to the Forbidden City), and the White Swan in Guangzhou have gained international reputations for their exquisite decor, international gourmet dining, and first-class service. Familiar chains such as Sheraton, Holiday Inn, Hyatt, Hilton, and Ramada now operate deluxe hotels throughout China as well. Business travelers note that China has come a long way in terms of service, management, and facilities. All 4 & 5-star hotels have complete business centers with computer and secretarial services available.(Courtesy CNTO)