Argentina - A little information and history. Plan your vacation today! 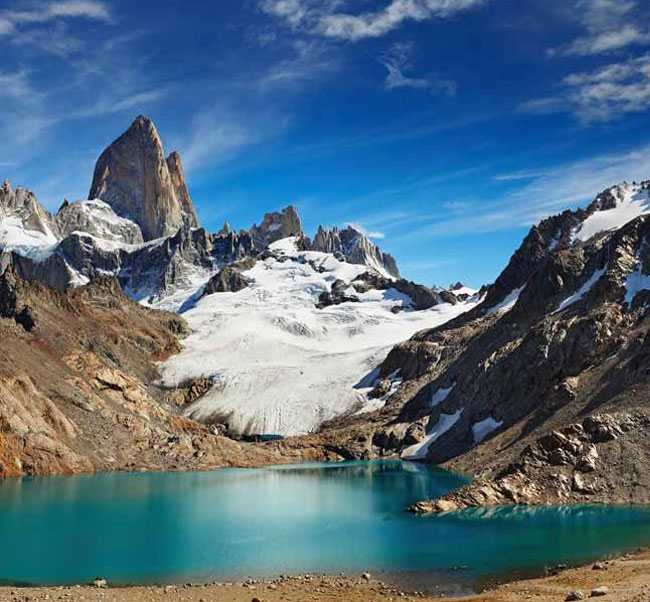 It comes from the Latin term "argentum", which means silver. The origin of this name goes back to the first voyages made by the Spanish conquerors to the Rio de la Plata. The survivors of the shipwrecked expedition mounted by Juan Diaz de Solis found indigenous people in the region who gave them silver objects as presents. The news about the legendary Sierra del Plata - a mountain rich in silver - reached Spain around 1524. As from this date, the Portuguese named the river of Solis, Rio de la Plata (River of Silver). Two years later the Spanish used the same name. The National Constitution adopted in 1853 included the name "Republica Argentina" (Argentine Republic) among the official names to designate the government and the country's territory.

Located in South America, and thus, in the southern hemisphere, Argentina has an area of almost 3.8 million square kilometers, 2.8 on the continent – approximately 54% are plains (grasslands and savannahs), 23%, plateaus, and the other 23%, mountains - and the remainder in the Antarctic. It is 3,800 Km. long and is located between latitude 22º and 55º. Its border with Uruguay, Brazil, Paraguay, Bolivia and Chile has a perimeter of 9,376 Km, while the territory bordered by the Atlantic Ocean is 4,725 Km long.

Argentina's main characteristic is the enormous contrast between the immense eastern plains and the impressive Andes mountain range to the west. This is the frontier with Chile and boasts the highest peak in the Western hemisphere: the 6,959 m high Aconcagua.

From Jujuy to Tierra del Fuego, the Andes present marvelous contrasts: the Northwest plateaus, the lake region, the forests and glaciers in the Patagonia.

To the north, Chaco is a forested area linked to rivers Bermejo, Salado and Pilcomayo.

Between the ParanÃ¡ and Uruguay rivers, the Argentine Mesopotamia (provinces of Entre Rios, Corrientes and Misiones) is formed by low hills, where pools and marshlands evidence the ancient courses of these great rivers. In some places within the subtropical rain forest, there are fissures which provide such spectacular phenomena as the Iguazu Falls.

The Pampas, in the center of Argentina, is the largest and best-known area of plains. Agricultural and livestock activities are performed in this area, which includes the province of Buenos Aires, the northeast of La Pampa, the south of Cordoba and south of Santa Fe. To the south, the plains give way to small hills in Tandil and de la Ventana, and to the west, to the Cordoba hills.

Towards the south, from the Andes to the sea, there appear the sterile and stony plateaus of Patagonia, swept by the wind during most of the year. The Atlantic coast, lined with high cliffs, forms massive indentations like the Peninsula Valdes, with its spectacular and unique colonies of sea animals.

The country's territory offers a wide variety of climates: subtropical in the North, sub-Antarctic in the southern Patagonia, and mild and humid in the Pampas plains. Media temperature from November to March is 23º C, and 12º C from June to September.

Argentina's current population is more than 38 million inhabitants, almost half of which live in the city and the province of Buenos Aires. Population density calculated on a national basis is 14 inhabitants per square kilometer

Spanish is the official language of the Argentine Republic. In Buenos Aires, some "lunfardo" expressions -city slang - are used.

There is complete religious freedom in Argentina, although Roman Catholicism prevails. Other religions practiced in the country are Protestant, Jewish, Moslem, Greek Orthodox, Russian Orthodox and others.

Argentina consists of 23 provinces plus a federal district, the City Buenos Aires. The Argentine Constitution establishes a Republic under a representative and federal system, and three separate branches of government: executive, legislative and judicial.

The executive branch is exercised by the President and Vice-president of the Nation, elected for a 4-year term, and who may be reelected for a single additional term. The legislative branch is bicameral: the Senate (composed of three senators from each province and from the City of Buenos Aires) and the House of Representatives (composed of representatives elected directly and in proportion to each district's population). The judicial branch "is vested in the Supreme Court and lower courts of justice".

Each province has adopted its own Constitution in accordance with the National Constitution, to rule its administration. The current National Constitution dates from 1853. Nevertheless, it was amended in 1860, 1898, 1957 and 1994. The last amendment made in August 1994, allows the President's reelection for an additional term.
Two historic dates

May 25, 1810. The first "Gobierno Patrio" or National Government Assembly was constituted.