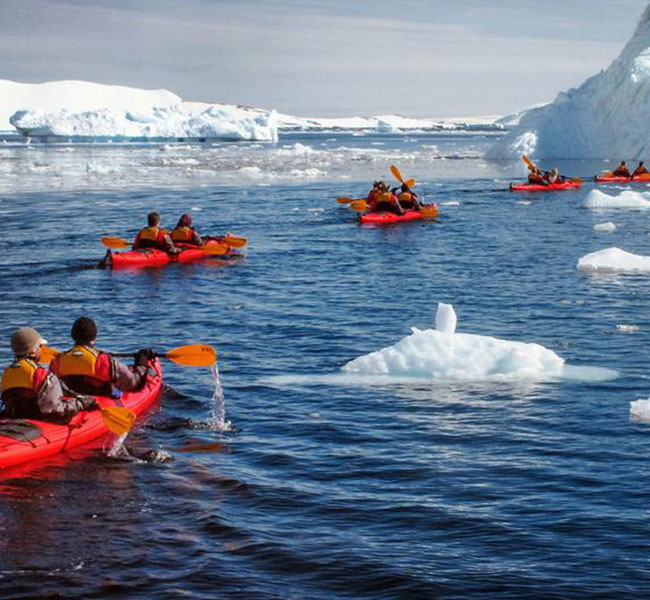 "If Antarctica were music it would be Mozart. Art, and it would be Michelangelo. Literature, and it would be Shakespeare. And yet it is something even greater; the only place on Earth that is still as it should be. May we never tame it." -Andrew Denton

"It's like visiting another planet without ever leaving this one".

How do I get to Antarctica?

Mysterious and vast, Antarctica - the "blue continent" at the bottom of the world - is like no other place on Earth. A land of glittering ice, majestic peaks and dazzling beauty, it is the only continent with no indigenous population. Instead, it has for millions of years been a haven for migratory birds, whales, seals and other marine mammals who come each summer to feast in is food-rich coastal waters.

Step into a world removed from your own

When you choose an Antarctic expedition, you step into a world so removed from your own, you may feel you've landed on the moon, or stepped into a fairy tale. Here the sun neither rises nor sets. Icebergs drift. Curious penguin chicks may climb right into your lap. Orcas and humpback whales may breach or spy-hop mere meters away, before fixing their ancient eyes on yours and sinking beneath the sea.

Quark Expeditions has been the world leader in personal polar adventures for over two decades. We know these waters like nobody else. When you're ready for the best Antarctic cruise in the world, call us. We look forward to welcoming you!

Most cruises to Antarctica take place during the southern summer, between November and March. If you visit in the early spring (beginning in November), you'll see countless penguins marching from the sea to their inland nests. You'll also see great numbers of other seabirds - including the almost-mythic albatross - arriving at their southern breeding grounds. If you come in high-to-late summer, you'll still see plenty of seabirds, along with whales and more seals than you ever thought possible, all fattening up in Antarctica's food-rich waters before their winter migration north.

How much time will you need for your Antarctic expedition?

Antarctica is the world's fifth-largest continent, and there's a lot to see. Depending on how much time you have and where you'd like to go, you can spend as little as 8 days (Antarctica Fly-and-Cruise) or as long as a month (Antarctica's Far East) exploring it. You'll find detailed itineraries listed under each expedition.

But won't I freeze to death?

Although Antarctic weather is extremely changeable, summer temperatures hover just above the freezing mark - comparable to a warm winter's day in North America. The 24-hour sunlight warms air in sheltered areas, so hyou can also find yourself stripping down to shirtsleeves. Either way, don't worry. Our Expedition Leaders will make sure you're perfectly comfortable, plus you'll get your very own Quark Parka to keep.

What about the notorious Drake Passage?

It's true that some of the world's roughest waters can be encountered in the Drake Passage, between Cape Horn and the tip of the Antarctic Peninsula. But please don't be disappointed if you experience a smooth crossing. Not all Drake Passage crossings are rough! You can even avoid the whole issue by choosing our 8-day Fly and Cruise expedition, which flies you across the Drake Passage right to King George Island to embark the ship.

Exploring Antarctica is much safer and more comfortable than it was even 50 years ago, thanks to new technology and modern safety standards. Every Quark trip takes place on specially equipped ships with the highest polar ratings, piloted and crewed by professional, polar mariners of the first order.

All Quark Antarctic travel also operates under a voluntary code of conduct developed by the International Association of Antarctica Tour Operators (IAATO), designed to minimize impact of visits to these fragile environments. We are 100% committed to ensuring this pristine wilderness remains protected for future generations.

Antarctica Travel - don't save the best for last

Some people save Antarctica for their last adventure - something to be done after they've seen everything else. But those who've been always wish they'd gone sooner. For many, it is a profoundly spiritual experience - an encounter with the raw power and beauty of nature, and a recognition that we are small parts of a much larger whole.

So we say, why wait? While others roam the Galapagos Islands or the African Serengeti, you can be on the adventure of a lifetime: sailing past mystic blue icebergs, kayaking with orcas and humpback whales, bearing witness to Earth's last great wilderness.

Antarctica cruises are a fantastic way to get away from it all. (Courtesy Quark Expeditions)