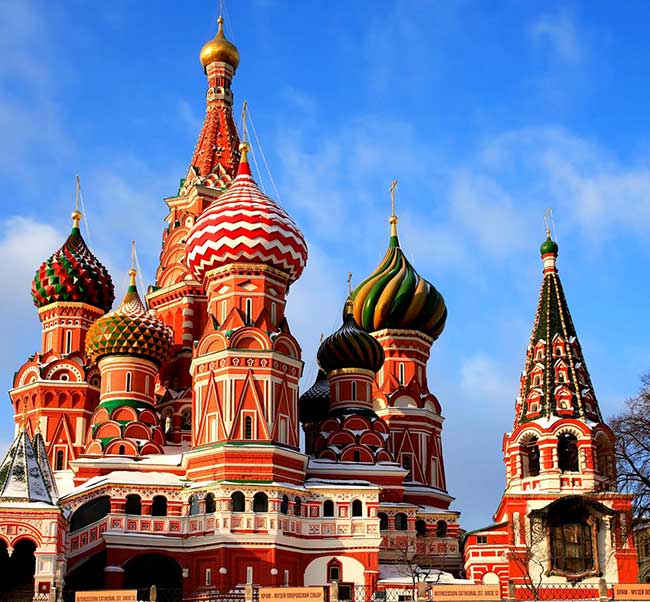 Another very important administrative, business and cultural centre is Saint Petersburg, often referred to as the second, or the northern capital of Russia. There are over a thousand towns and cities in Russia. The largest cities with over 1 million inhabitants each are the following: Moscow (over 9 million), Saint Petersburg (about 4.7 million). Nizhny Novgorod, Novosibirsk, Yekaterinburg, Samara, Omsk, Chelyabinsk, Kazan, Perm, Ufa, Rostov-on-Don, and Volgograd.

Russia is a democratic federative republic with presidential government and the parliament consisting of two houses, the State Duma and the Council of Federation. Head of state is elected once in 6 years. In 2008, Dmitry Medvedev was elected President of the Russian Federation.

The city is said to date back eight and a half centuries, with the first references to it in chronicles from 1147. It was built by Suzdal's Prince Yuri Dolgorukiy on the sweeping curve of the Moskva River. From its humble beginning as a hunting village, it grew steadily into a fortress city, to become later the central point of the whole Russian state.

Russia's most intense human aspirations, be they artistic, religious or political, have found their most passionate expression in Moscow. The reflection of these aspirations can be seen in the beautiful architecture created over several centuries, particularly in Moscow's symbols the Kremlin, the Red Square and St. Basil's Cathedral.

Moscow is the capital of the Russian Federation and one of the country's most popular destinations for foreign visitors.

Moscow is one of the largest cities in the world. Moscow has grown rapidly over the past decades, and, as a result, comprises high rise suburbs surrounding a relatively compact historic centre with fascinating ancient architecture. Apart from being a major political player on the world stage Moscow is also an extremely popular city for business and tourism.

St. Petersburg is the second largest city in Russia and one of the world's major cities, which has more to offer than just the Hermitage Museum and the Kirov Ballet. It is one of the biggest cultural centres in the world, a city with an exceptionally rich history, centuries old traditions and a promising future.

Almost all basic trends in the world and Russian architecture of the 18th-20th centuries are represented in St. Petersburg. St. Petersburg has played a vital role in both Russian and European history. Founded by Peter the Great in 1703 it was the capital of the Russian Empire for two centuries.

The islands are connected by more than 342 bridges, of which 21 are raised at night. This gives the city its name The Venice of the North. It is therefore little wonder that the city is called a Museum in the Open Air». Among the majestic memorials, you can feel the breath of intellectual life, which was brought into St. Petersburg by Peter the Great. The most famous professors, such as Leibnitz from Germany, worked on a project for the creation of the Science Academy and other institutes.

Today St. Petersburg is ranked alongside Paris and Rome as one of the most beautiful cities in the world.